Story originated from a 60 Minutes Special: A tiny country in "Hurricane Alley" is trying to be an example to the world after Category 5 storms demolish[...]

Earth is running out of time, literally.

How long until it's too late to save Earth from climate disaster? A New York City clock is now counting down the time remaining before our CO2 budget is gone

“Metronome" is a mixed-media work that covers a 10-story-high area on the north wall of One Union Square South, a residential high rise in Manhattan. Now, instead of measuring 24-hour cycles, Metronome’s digital clock has adopted a new ecologically and time sensitive mission.

Last weekend, the clock flashed a new message - “The Earth has a deadline” - with the numbers 7:103:15:40:07, which represent the years, days, hours, minutes and seconds until that deadline expires.

Artists, Gan Golan and Andrew Boyd, felt the "Climate Clock" would have the most impact as a public illustration demonstrating the urgency of combating climate change before the effects become irreversible displayed in a conspicuous space and presented like a statue or an artwork.

The "Climate Clock" is based on calculations by the Mercator Research Institute on Global Commons and Climate Change in Berlin.

The MCC is a scientific think tank. In their report issued in 2018 they said global warming was likely to reach 1.5°C over preindustrial levels between 2030 and 2052 if it continues at the current rate. That level of warming is projected to increase damage to many ecosystems and cause an estimated $54 trillion in damage.

The website also tracks the growing percentage of the world’s energy supplied from renewable sources. 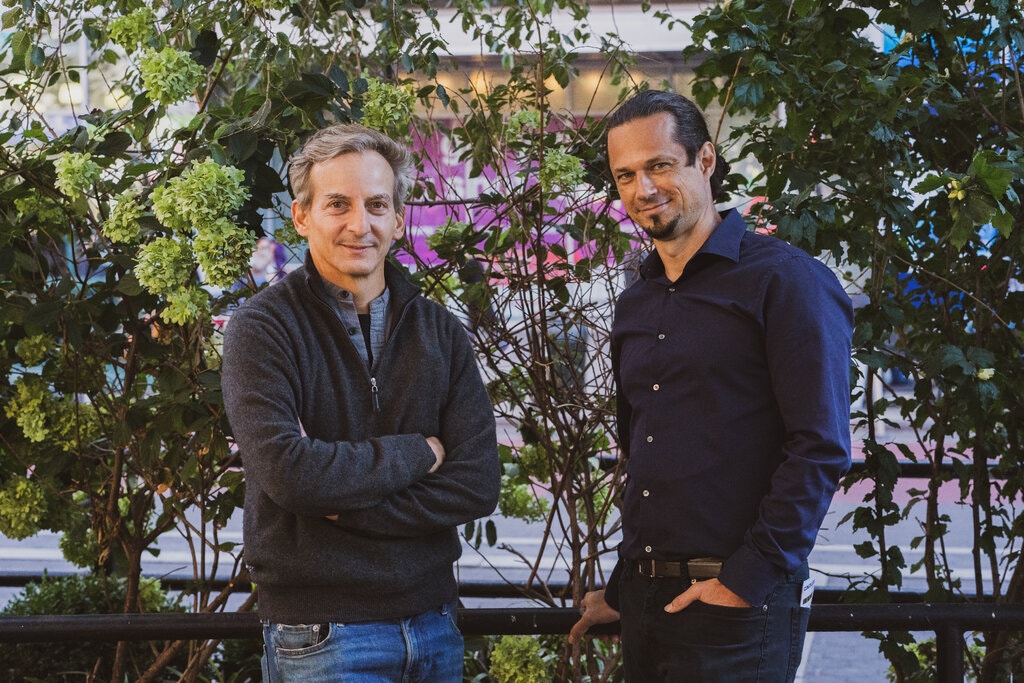 From left, the artists Andrew Boyd and Gan Golan in Union Square in Manhattan. Credit...Jeenah Moon for The New York Times

“You can’t argue with science,” Mr. Boyd said. “You just have to reckon with it. This is arguably the most important number in the world. And a monument is often how a society shows what’s important, what it elevates, what is at center stage."

The climate clock is a profound reminder for the world just how perilously close we are to the brink and one of the many initiatives encouraging everyone to join in the fight for the future of our planet.

What if we installed solar panels on every suitable roof in the United States? How much electricity would they generate?

Estimate shows rooftop solar could produce almost 40% of our electricity A group of researchers from the US National Renewable Energy Laboratory decided to take another whack at a national estimate. The researchers took advantage of a Department of Homeland Security program that laser-maps buildings, which now covers almost a quarter of buildings in the US.  They accounted for the number of buildings, size of roofs, direction the roofs are facing, strength of sunlight, number of sunny days, and so on.

Here are the numbers

In total, they estimate that there are a little over 8 billion square meters of suitable roofs in the US. Cover that in solar panels, and you would produce about 1,400 terawatt hours of electricity each year—about two-thirds of which would come from small residential buildings. The total production is equal to nearly 40 percent of the total electricity currently sold by utilities in the US.

A simpler 2008 National Renewable Energy Laboratory estimate came in at just 22 percent of electricity—the new estimate shows a higher percentage because solar panel efficiency has improved significantly and because new sources of data made a more accurate estimate possible. 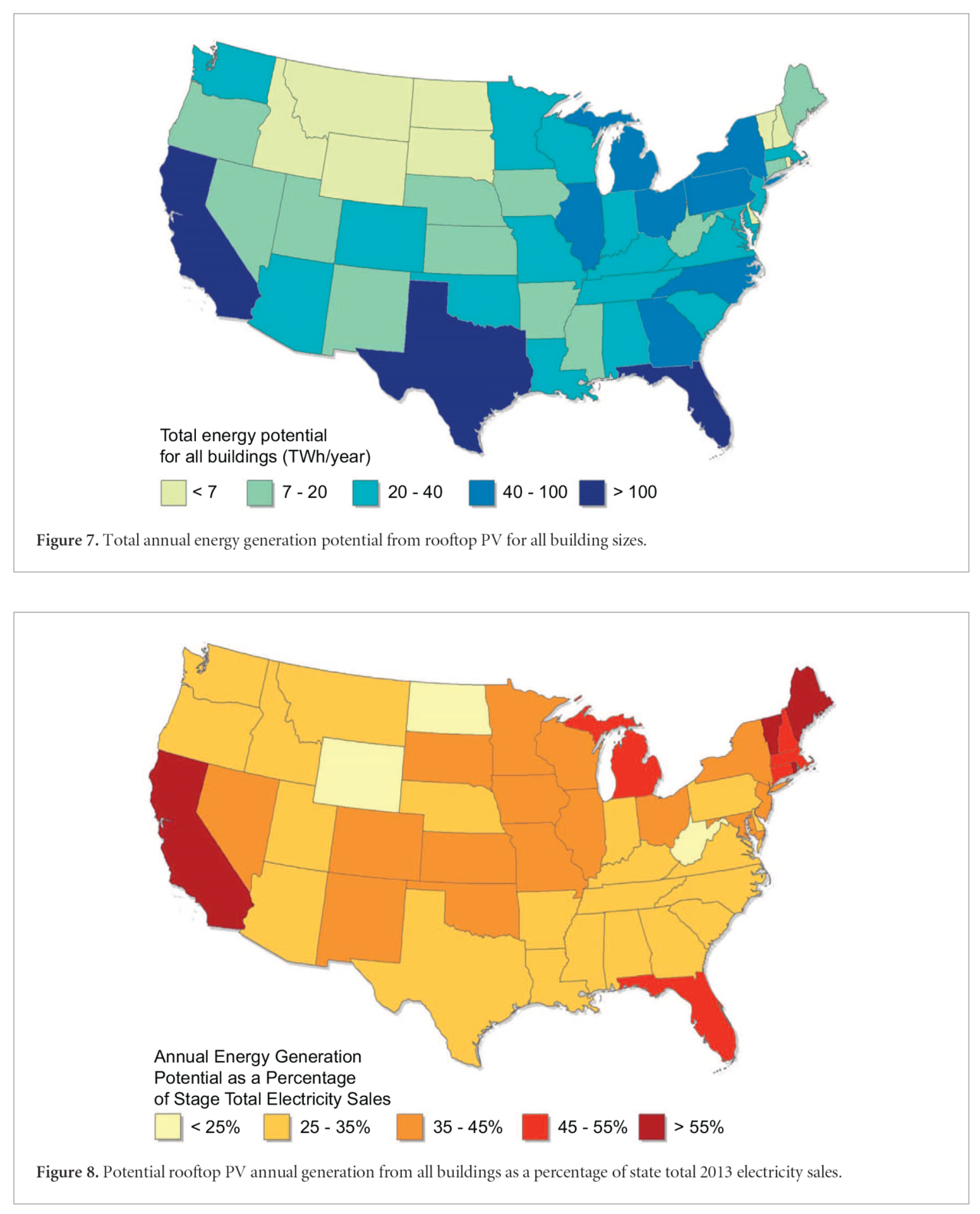 Apart from the big numbers, there are some interesting details at the state or local level. States with strong sunlight and plenty of roofs obviously have the most potential—California, for example, could supply 74 percent of its total electricity use by covering its buildings with solar panels, while Wyoming could only get to about 14 percent.

But that’s partly because of different electricity use. New England doesn’t have the sunniest skies, but the limited need for air conditioning in the summer helps keep electricity use down. As a result, that region could produce about half its total electricity from rooftop solar. And if you consider residential buildings separately, they can produce about as much electricity as people use in their homes.

Overall, the all-in scenario of slapping solar panels on every single building wouldn’t be enough to replace all our power plants, but 40 percent ain’t bad.

If Florida is the Sunshine State, why isn't there more solar already?

In Florida, utilities make money on virtually all aspects of the electricity system — producing the power, transmitting it, selling it and delivering it. And critics say the companies have much at stake in preserving that control.

The utilities have hindered potential rivals seeking to offer residential solar power. They have spent tens of millions of dollars on lobbying, ad campaigns and political contributions. And when homeowners purchase solar equipment, the utilities have delayed connecting the systems for months.

This is why you need to work with a reputable solar advisor and installation company. Schedule some time to talk to Vinyasun today and find out why switching to solar can save you long-term.

Click here for your FREE custom design and quote

The New York Times article: Florida's Utilities Keep Florida Homeowners from Making the Most of Solar

The Washington Post article: How long until it’s too late to save Earth from climate disaster? This clock is counting down.

ARS Technica article: A solar panel on every roof in the US? Here are the numbers

Can FPL or my HOA prevent me from switching to solar?

The Florida Solar Rights Act is a law that forbids any entity—including homeowner associations—from prohibiting the installation of solar or other renewable energy devices on Florida buildings.

Finally, any requirement(s) that a system be screened from view by trees, fences, ground mounting racks, or a remote roof location that is hidden from the street, will generally violate the statute.

Is solar free for Florida homeowners?
Does solar increase my home value?

Not only can adding solar panels to a home save energy costs and help the environment, it also can potentially increase a home’s value. In 2019 Zillow found that homes with solar energy systems sold for 4.1% more on average than comparable homes without solar power. For the median-valued home, that translates to an additional $9,274.

The sale premium varies substantially by market. In Riverside, Calif., for example, homes with solar-energy systems sold for 2.7% more than comparable homes without solar power—a markup of $9,926 for the median-valued home in the metro. In the greater New York City metro, solar-powered homes have a premium that is double that of Riverside. At 5.4%, that’s an extra $23,989 in value for the typical home in New York. In three other coastal metro areas—Los Angeles, San Francisco and Orlando, Fla.—homes with solar power can fetch a premium of around 4%.